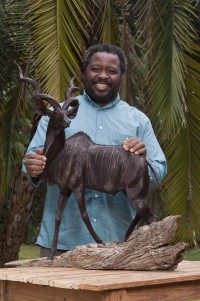 Naples, FL: (January 16, 2020) . . . Meet world-renowned Ndebele Master Sculptor Mopho Gonde at the opening reception of his exhibition of masterful hand carved creations at Call of Africa’s Native Visions Gallery located at 737 5th Avenue South on Friday, February 28th from 6 pm until 9 pm. The exhibition is open to the public on Saturday, February 29th from 11 am until 2 pm. This exhibit runs through March 20, 2020.

On Friday evening, Gonde will meet with collectors and discuss his original leadwood fine art creations. South African wine and hors d’oeuvres will be served. The gallery requests guests kindly RSVP by calling the gallery at (239) 643-3785.

A primarily self-taught artist, Mopho creates carvings of Africa’s wild animals in the unique medium of leadwood. Born and raised in Zimbabwe, Mopho Gonde is now hailed as the finest wildlife sculptor in southern Africa producing works reflecting key stretches of the Zambezi River watershed, a biologically rich corridor seen as a bellwether for African wildlife.

Gonde wants to pique the consciousness of viewers, not with doom and gloom but with captivating works of overwhelming natural power and beauty. Like the great American painter Thomas Moran, whose portrayals of the northern Rockies helped convince members of Congress to set aside Yellowstone as the world’s first national park, he hopes his art can have a similar impact.

“The greatest thing about leadwood is that living hardwood trees need not be destroyed,” says Ross Parker, Call of Africa’s founder.  “This medium comes from dead trees, once pushed over by great elephants, which have laid in the African sun and rain for years and have almost become petrified.”

Like teak, leadwood is extremely hard and when polished turns a rich reddish color, giving it a wonderful earthy look. Mopho’s animal sculptures are painstakingly created by hand and capture the very essence of each animal in exacting detail. Because of the degree of workmanship that goes into creating each piece, Native Visions only receives between 17 and 20 pieces a year. This puts Mopho’s work in high demand as serious wildlife art collectors recognize his great talent.

Parker is a Zimbabwean expatriate and former Special Forces soldier who fought in the Rhodesian bush war. He became an American citizen a decade ago. An artist himself, he’s been a lifelong naturalist and was raised on a farm in the Zimbabwe bush before attending the renowned Plumtree School. Upon arriving in the US, he worked in the diamond and sports car businesses but returned to his passion, art, when he opened his first gallery in Boca Raton in 1987. The Naples gallery opened in 1999 featuring traditional and contemporary landscapes, seascapes, wildlife and bird life.

“My gallery is where art became a vehicle for giving back in every sense of the word and I knew there was nothing more powerful in bringing the plight of Africa to the attention of the world than showcasing African Art,” he says.