‘People’s Plan’ for Design District in Naples starts to emerge 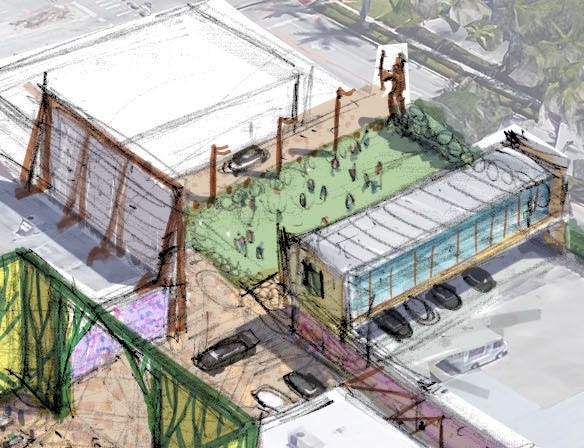 A charrette for a remake of the Design District in Naples has come to an end.

Now, the real work can begin on what’s been dubbed the “people’s plan.”

An eight-day charrette concluded Tuesday, with a closing presentation by DPZ CoDesign on the best — and most popular — ideas from the public brainstorming sessions for a new master plan.

One of those ideas? To activate the district by creating a Design Walk with public art, outdoor dining and entertainment venues between U.S. 41 and Tenth Street, using alleyways, parking lots and empty spaces between buildings.

New public offerings could include everything from a basketball court and giant movie screen to changing digital art and food trucks. Spaces would be designed to come to life, with nighttime events in mind.

Blocks could have different themes, or even different colors, to add interest.

The charette’s brainstorming process included a series of meetings for the district’s residents, business owners and commercial property holders.

Even kids had a chance to give their input along the way, with crayons and paper provided at a temporary, makeshift design studio in The Collective off 10th Street South, where public meetings were held, comments were gathered and ideas were hatched.

Ideas got pinned up daily at the studio, for viewing and feedback. 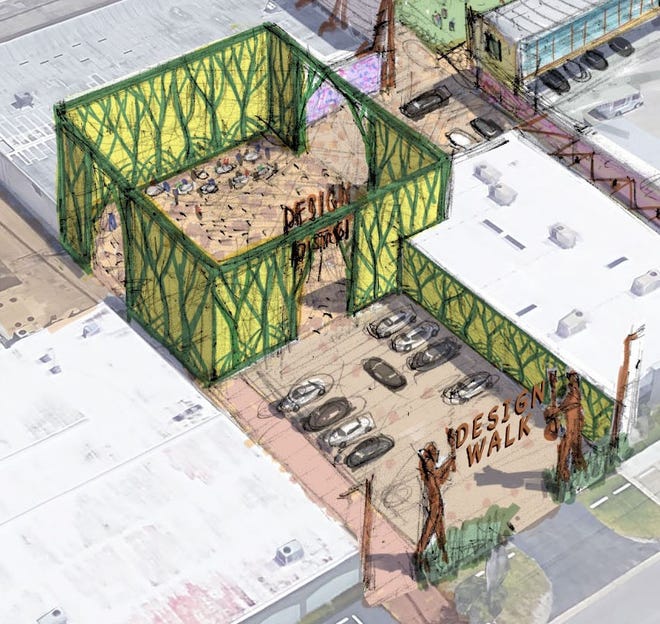 Likened to a multi-day town hall, the charette is a way to bring all stakeholders together, through a team approach, to create a design — and a plan to implement that design — with the help of a group of hired experts.

The Design District is located to the east and the north of U.S. 41, to the west of Goodlette-Frank Road, and to the south of Seventh Avenue North. It’s also known as the 41-10 District (based on its geography).

The area is diverse and spans more than 200 acres — and it’s a slice of a larger swath the city has long targeted for redevelopment.

Through the public process, property owners have overwhelmingly made it clear they want to keep the moniker Design District. The area earned the name years ago after attracting a concentration of architectural, interior design, home décor and other design-oriented businesses.

Galina Tachieva, a managing partner of DPZ, who directs the firm’s work around the world, said no matter the final outcome, the new plan will illustrate something very different from Fifth Avenue South and Third Street South, two of the city’s most well-known shopping and dining spots.

“This place has a lot of potential,” she said of the Design District.

The potential to become a third destination in the city, but without destroying what makes the district different — and special, Tachieva added.

“It has a unique character and we would like to preserve that character,” she said.

Based on concerns the design team heard from property and business owners, Tachieva said the district would be reimagined in a way that would ensure it’s “not overrun by tourists.”

It could become a jewel, but one that’s a little rough around the edges, instead of one that’s too shiny, or glitzy, like many other parts of Naples, Tachieva said.

The design team also heard loud and clear from residents and business owners their desire to keep the district’s small-scale feel, by limiting the height and area of future buildings, she said.

Often, the codes adopted by cities to spur the redevelopment of their main streets have the effect of overlaying a “straight jacket” of rules and regulations, she said, and that’s not going to work for the Design District if its identity is to be protected and enhanced, not lost.

While there are almost 100 businesses in the district, including restaurants and shops, Tachieva said there’s the potential for many more — and an opportunity to make the area a lot more fun and relaxing.

“It is important to make this attractive to the younger generation,” she said.

The City of Naples Youth Advisory Council surveyed more than 950 Naples High School students and their overwhelming desire was to have “more places for young people to gather.”

“I am so moved by their involvement. It’s exceedingly rare in the cities we visit to get them activated,” said Paul Genovesi, project manager for DPZ CoDesign.

If the district becomes “too cool,” Tachieva cautioned that tourists will probably discover it, as they increasingly want to go where the locals go.

DPZ has taken those concerns to heart, Tachieva said, and will include a much lower number than 185,000 in its plan.

“Nobody wants to see anything above three stories,” she said. “We got that.”

During the charette, DPZ also heard business owners face difficulties in getting city approval for renovations and new uses.

“We will try to reduce red tape as much as possible,” Tachieva said.

The team will look for ways to make the district more pedestrian-friendly and to improve traffic flow. The master plan could include building a few more parking garages, including one on Tenth Street, as parking is generally inadequate, Tachieva said.

She sees the potential for at least one new shopping center with specialty shops and eateries, such as an independent bookstore and maybe a tea store or a bakery.

In her closing presentation, Tachieva touched on other ideas for the district, including improvements to George Washington Carver Apartments, a 70-unit low-income housing community sitting on city-owned land. 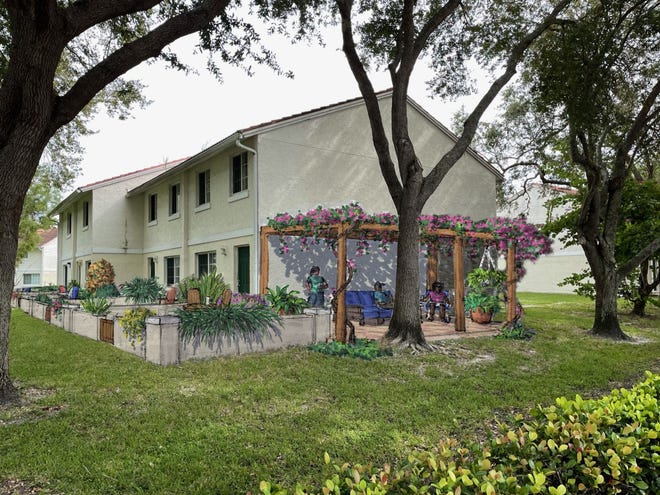 Though the apartments are well-maintained, they lack private outdoor spaces for residents, and one solution may be to add low walls and hedges to create front and rear courtyards outside of the units, she said.

Another opportunity her team sees for the housing complex? The creation of shared porches on blank sidewalls, with pergolas and canopies, making them homier.

Built in the 1980s, the apartments will eventually need to be rebuilt, Tachieva said, and when that happens they could be organized and designed much better, so that they fit in with the surrounding community.

On a much smaller scale, Tachieva suggested changing the light poles in the district, to be more cohesive and less ritzy, to better reflect the image property owners are wanting to convey. For example, she said, one block could have posts shaped like candles.

The final master plan will include many other recommendations, such as water and sewer, transportation and mobility improvements.

The Community Redevelopment Agency — governed by City Council — would oversee the implementation of the plan, with assistance from its advisory board.

Jeffrey Oris, the CRA’s interim manager, said he expects to see a draft master plan by early January — and to have final approval by spring.

“This can’t be a DPZ plan, it can’t be a city plan or a CRA plan,” he said. “It’s got to be something the residents, and business and property owners can stand behind.”

Oris said he couldn’t have been happier with the turnout for the closing presentation — and with the property and business owners’ involvement, through the public sessions and online through a dedicated project website speakupnaples.com, where more than 100 ideas have been shared.

The website will remain up and running for several more months, to encourage more ideas and conversation.

To date, more than 1,000 people have participated in the design process in one way or another, Oris said.

“Right now what we have is a whole bunch of ideas,” he said. “They are going to be refined a little bit.”

The CRA has set aside $500,000 for improvements to the Design District this fiscal year, recognizing there will likely be an opportunity to implement at least parts of the plan in spring or summer.

A tax increment financing district has allowed the city to capture gains on real estate values in its larger redevelopment area, which can be used to make community improvements and spur private development in the slice that is the Design District.

The CRA can borrow money against its future revenue for larger projects. However, money isn’t always the issue, as there are many challenges in implementing master plans with such big ideas.

“They are doable,” Oris said. “But there are things we have to overcome first.”