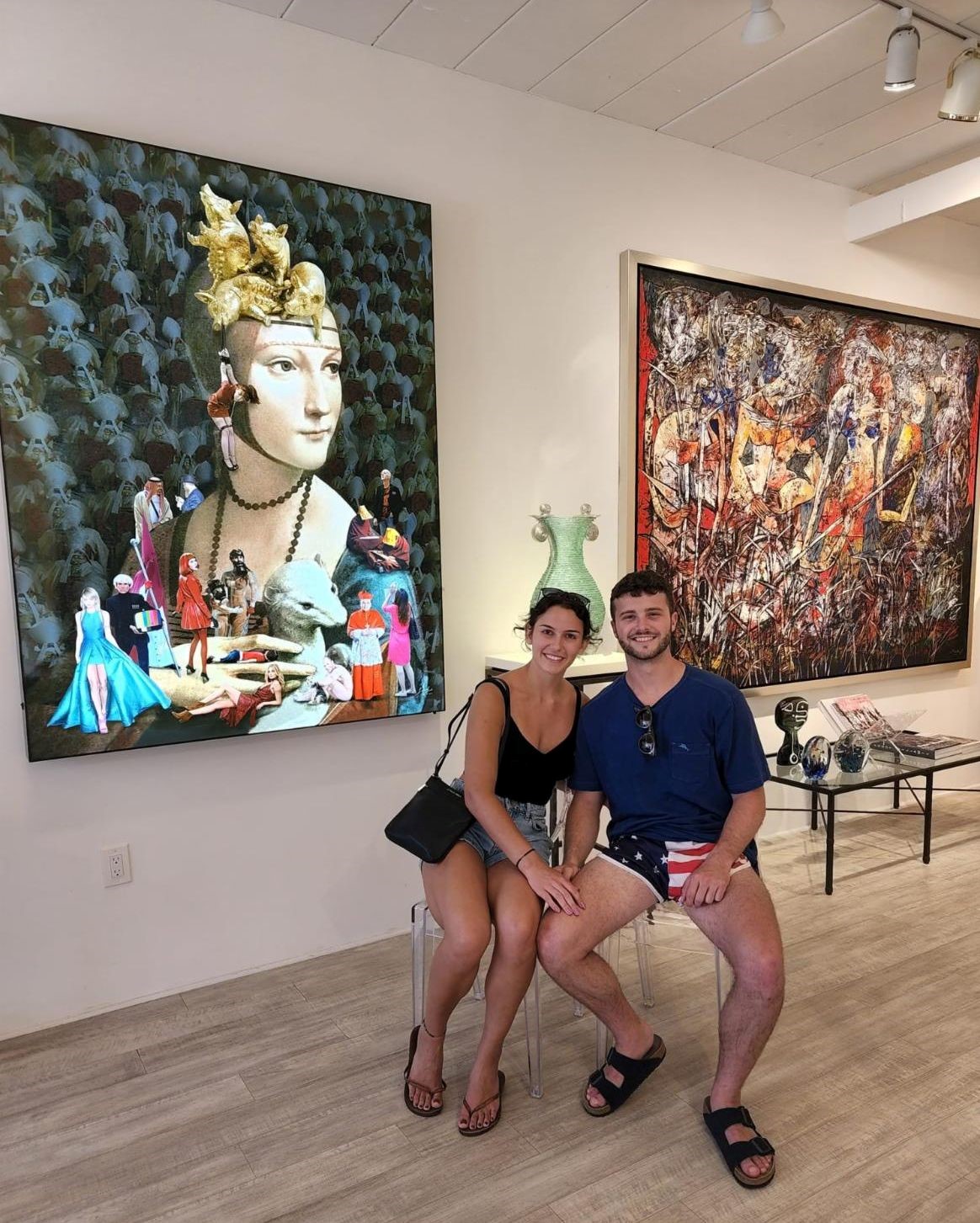 Our galleries in Naples and in Estero, Florida have seen a rise in visitors and art collectors. Our customers compliments are very positive. Thank you to all our loyal customers for their continued support.

KINETIC ART BY HUGO DIAZ – Born in Venezuela in 1965 he holds a degree in Engineering of Computer Systems from the Metropolitan University, Caracas, Venezuela. He is an artist expressing himself in Kinetic Art. Hugo Diaz’s work encompasses geometric abstraction, color, lines, light, and other elements to create art that includes virtual movement. Kinetic art movement was initiated by masters such as Israeli artist Yaacov Agam, French-Hungarian artist Victor Vasarely, and Venezuelans Jesús Rafael Soto and Carlos Cruz-Diez.

NEW PAINTING BY FREDY VILLAMIL – “In the Garden” an oil painting by Villamil just arrived to the Naples gallery. His work is strongly influenced by Modern Masters, including Pablo Picasso, resulting into a signature all his own. Many of his works are also on display at our Estero location.

We are pleased to announce that the Aldo Castillo Gallery has been appointed by their estates to represent the modern works of Guatemalan Rodolfo Abularach and of South African artist Lorna Marsh.

Rodolfo Abularach, Guatemala City, Guatemala 1942-2022 is considered to be one of Latin America’s most distinguished Masters He won international recognition with his dramatic images of the human eye. His works are included in the permanent collections of museums including Metropolitan Museum of Art, New York, the MoMa – Museum of Modern Art, New York, and the Museum of the Americas, Washington, DC.

Lorna Marsh, Cape Town, South Africa 1949-2022. She is considered one of the most important female artists of our time. She was a keen thinker and delighted in testing boundaries, which is reflected in her art. Internationally celebrated, her works were often confrontational and explored such themes as mankind’s destructive relationship with nature. Her painting of a lion’s head on a stake planted in a scorched landscape comes to mind.

We are proud to announce that the Chicago LGBT Hall of Fame has elected, Aldo Castillo to their Board of Directors 2022.

In 2005, Aldo Castillo was inducted into the Chicago Hall of Fame. He has been recognized for his work with Gay Rights and AIDS education during the AIDS health crisis in the 80’s and 90’s. Castillo has been instrumental in his pursuit against racism, homophobia, and transphobia in the United States.

Aldo has given endless time and efforts towards charities through ART. He believes ART is a powerful tool that can be used to bring people together and further the cause to end discrimination of LGBT community. Moving forward, Aldo Castillo’s mission is to further awareness and positive movement for the rights of the LGBT community.

Would you help with this mission? Make A Donation here! Be part of the Change.

WHAT’S NEXT?
Look for a future announcement about our 30-year anniversary celebrations.