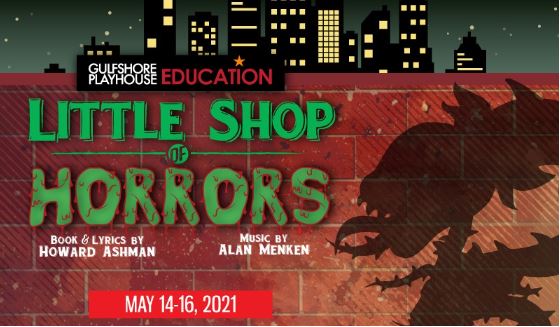 Featuring book and lyrics by Howard Ashman and music by Alan Menken, “Little Shop of Horrors” tells the story of hapless shopkeep Seymour, who brings prosperity to his run-down flower shop when he obtains a mysterious and rare plant. In this smash-hit, comedy rock musical, prosperity quickly turns to horror as Seymour learns the plant only hungers for one thing — human blood. Adapted from the blockbuster hit film, “Little Shop of Horrors” has devoured the hearts of theatregoers for more than 30 years.

“Little Shop of Horrors” is directed by Gulfshore Playhouse Director of Education, Steven Calakos. An experienced elementary, middle and high school teacher, with more than a decade of experience in theater education, Calakos is the founder and previously served as artistic director of CHS Theatrical, a New Jersey–based independent theater company that hosted the annual South Jersey Student Theatre Festival for high schoolers.

A New York native and Broadway veteran, Carolann Sanita will serve as Music Director. Sanita toured as Marian in the first national tour of “The Music Man,” has performed at the Palace Theatre on Broadway, as well as numerous regional and international theatres. She also serves as an adjunct voice professor at Florida Gulf Coast University.

Allison Scott, a graduate of Marymount Manhattan College with more than 10 years of experience dancing, choreographing, teaching and performing in New York, will choreograph “Little Shop of Horrors.”

“‘Little Shop of Horrors’ is an iconic dark comedy that STAR Academy students have had a lot of fun with,” said Calakos. “When else do you get the chance to battle a man-eating plant – and sing and dance while doing it?”

Performed by students ages 13 to 18, evening performances will take place at 7:30 p.m., with Saturday matinees at 2 p.m. and Sunday matinees at 3 p.m. To purchase tickets, visit GulfshorePlayhouse.org.

Gulfshore Playhouse Education also recently announced a slate of summer camps and classes for students ages 6-18. The half-day and full-day camps provide a safe and fun environment for students of all skill levels to learn from nationally recognized professional artists. Not only will students learn about acting, singing and dancing, but the camps instill confidence, creativity and collaboration among our young leaders of tomorrow while sharpening skills in the performing arts. Gulfshore Playhouse Education’s STAR Academy will also produce two student productions this summer: “Grease,” and “Junie B. Jones.”

Gulfshore Playhouse is also leading the nation’s growth for arts and entertainment with the new Cultural Campus featuring the Baker Theatre and Education Center. Boosted by Patty and Jay Baker’s recent second $10 million match gift announcement, pledging to match all gifts made by July 4, 2021 up to $10 million, the new Cultural Campus is slated to break ground this fall. The Cultural Campus has been created as a cornerstone for culture, education and community engagement that epitomizes the region’s growing reputation as a destination for the arts. The Baker Theatre and Education Center will be home to world-class productions that have the power to foster connections, catalyze conversations and bridge cultural differences. The Cultural Campus will also serve the entire region with accessible theater education programming and stunning cultural engagement spaces open to the public.

Gulfshore Playhouse is also forging ahead with a fall Broadway Cabaret Series featuring Grammy and Emmy Award–winning performer John McDaniel as master of ceremonies for three performances, and five, new world-class professional productions slated for the upcoming 2021-2022 mainstage season. Bringing together professional actors, directors, and designers from around the country, Gulfshore Playhouse will create a mix of comedic, musical and dramatic productions destined to uplift and inspire Naples audiences. Individual tickets and Season Flex Passes, available in 6-, 8- or 10-pack tickets that can be used at any time for any show, are now on sale.

Also this fall, Gulfshore Playhouse Education will debut their student production, “Annie,” and “Clue” next spring.

Gulfshore Playhouse is passionately committed to enriching the cultural landscape of our region by producing professional theatre to the highest artistic standards and providing unique educational opportunities to diverse groups of people in a spirit of service, adventure, and excitement. Inspired by a belief in the magic of theatre to expand the imagination, Gulfshore Playhouse is dedicated to creating productions that challenge the senses, provoke discussion, and revitalize in its audiences an understanding of our common humanity. This belief drives the care with which Gulfshore Playhouse treats its artists, audiences, students, staff, and members of the greater community.